This is a quick update to our Covid response requirements. First, we would like to thank all of you for your cooperation with regard to masks, social distancing, etc. The vast majority of our customers have been extremely supportive and we are grateful. As health officials continue to learn more about Covid, CDC mask recommendations have become more specific. So going forward, we now require fitted N-95 or multi-layer cotton masks that cover the nose & mouth. Bandanas, gators, and face shields alone are not effective substitutes for fitted masks particularly during colder months when the ventilation in our buildings is limited. We realize that not everyone has an N-95 or fitted mask so we are providing these at the entrances to both of our buildings.

We continue to provide hand sanitizers at both entrances and inside the shop at the front desk. We also ask that customers & customer groups continue to maintain six feet of distance between themselves and other shoppers & groups. New Hampshire Covid case numbers are rising as we move inside for the winter. We hope that these restrictions will help us remain open and will keep all of us happy & healthy thru the winter months.

Thank you all for your support and patronage. See you soon!

As we close out the summer, we want to reach out to thank you all for your support this year. As counterintuitive as it seems, we’ve had a great summer season and we are grateful to all of you for spending your hard earned dollars with us. We remain optimistic that we will be open thru the fall & winter, and we are looking forward to continuing our quest to keep the shop filled with fun, funky, cool, weird old stuff. Let’s put those masks on and keep moving forward! We hope to see you soon. 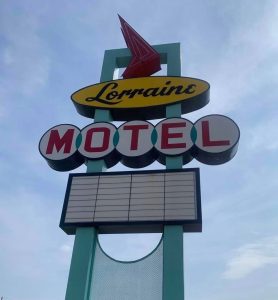 As most of our regular customers know, I just spent ten days moving my daughter to Memphis, TN (Billie was accepted into the Teach for America program and will spend the next two years teaching first grade Memphis). With the help of two dear friends, we rented a U-Haul trailer, hitched it to my van, and loaded both with an apartment’s worth of furnishings. We broke the trip into 3 parts–3 days to drive down; 4 days to get Billie settled, see some sights, and do some antiquing; and 3 days to drive home (which turned into 2 days for various reasons).

I bought lots of interesting stuff for the shop including garden antiques, vintage clothing, 2 iron baker’s racks, a mid-century modern yellow damask sofa & matching love seat (both still in original plastic covers), lighting, and lots of cool smalls. In terms of pricing, I visited six shops–three were too pricey to buy for resale but the picking was really good in the others. The dealers and shopkeepers were very kind and helpful. (One shopkeeper actually helped me unload & repack my U-Haul. I guess that’s what they mean by “southern hospitality!”)

Aside from antiquing, we got Billie settled into her apartment ( a very cute spot in the Midtown section of Memphis), did some grocery shopping, and still managed to squeeze in some sightseeing. We visited the Memphis Zoo (pandas!), Beale Street, and Graceland (I had to see the MCM decor). But the most memorable spot was the National Civil Rights Museum. The museum tells the story of the American Civil Rights Movement with artifacts, films, and interactive exhibitions. The walk thru the museum ends when visitors stand between the MLK’s Lorraine Motel bedroom & living room looking out at the spot on the balcony where he died. As overwhelming as the museum is, I was more overwhelmed by my own ignorance. As with most things, the more you learn, the more you realize how much you still need to learn.

Billie will be in Memphis for at least two years so I know that I will visit again. I will definitely hunt down more antiques for the shop, visit the pandas, and hang out in a Beale Street bar. But most importantly, I will go back to the National Civil Rights Museum because “Nothing in the world is more dangerous than sincere ignorance and conscientious stupidity.” MLK 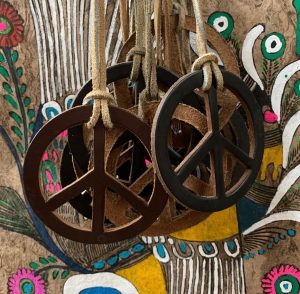 Today was the first time I’ve ever thrown anyone out of our shop. This man was a white man about my age (mid 50s) who came in to buy records.  I wasn’t in the shop when he arrived but Shannon told me that there was a man in the record room who wasn’t wearing a mask.  As I headed back to speak to him, he was heading toward me. I said “Sir, you need to wear your mask in the building.” He pushed by me as he pulled his mask/neck warmer up over his face.  He walked by Shannon on his way to the front desk and, after he passed her, she whispered to me, “He’s wearing Trump 2020 mask.” Despite the fact that Don was at the front desk, I was compelled to follow him. As he stopped to pay for his records, he turned and looked at me. All I could see was “Trump 2020” under a middle aged white man’s eyes. I said (tongue-in-cheek), “You’ll get a better deal in here with a different mask on.” Then he went off. At this point, I remember him yelling “your business wouldn’t be open without Trump” followed by “if this Black Lives Matter shit comes up here, you’ll go out of business” followed by something about Hillary Clinton going to prison.

I’m usually pretty composed and almost always polite, but not today. I heard myself say, “Get the fuck out of my shop and don’t ever come back here.” He continued to yell at me as he walked out, so I followed and repeated my “get the fuck out” instructions followed by “keep your mask on, asshole!” Then I walked back into the shop and out the back door to cry. Why cry? Because this is our safe space. This is our little corner of the world. This is our home. And the racism, misogyny, homophobia, and ignorance that has crawled out from under its rock has now made its way into our shop. This is profoundly sad for me.

But after thinking about this interaction, I realized several things.

It’s been one month since we reopened and we want to thank you all for coming back to shop with us. We are especially appreciative of everyone’s willingness to wear masks and maintain social distancing. This is our home environment so, in addition to protecting our customers, we are also focused on protecting ourselves so that we can stay open throughout the Covid-19 outbreak. We continue to be open daily and we continue our quest to bring you the funkiest, grooviest, coolest stuff we can find! So we soldier on, masks in place, and we send you all our love & gratitude! Colleen & Don

We are reopening on Monday, May 11 and we can’t wait to see you! We have new signage to specify the covid-19 related changes we have put in place. Please know that:
1. We require masks on all customers.
2. We have hand sanitizing stations in both buildings.
3. We are limiting the number of customers that can be in the shop at one time.
4. We are asking customers to maintain 6 feet of distance between themselves (and their group) and other customers (and customer groups).
5. We have signage to direct the flow of traffic thru the shop (take an immediate right when you walk thru the door).
6. We will be sanitizing our iPad & our hands before and after transactions. We are also happy to accept payment via PayPal for no-contact transactions.
7. If customers prefer to remove masks when shopping in our garden area, please do so only if you can maintain social distancing.
8. We continue to offer shopping via text photos and curbside pick-up for customers who aren’t yet comfortable shopping in person. (Colleen’s cell 603-496-4229)
We are new to all of this so please know that we are doing our best to keep us all healthy and happy! We hope you will let us know if there are any additional precautions that we can take to make you comfortable.
We would also like to thank you all for your support over the past two months. We are grateful.
Colleen & Don
We are happy to announce that we will be reopening on Monday, May 11! We will be following the guidelines provided by the State of New Hampshire which include: masks for employees & customers, hand sanitizer stations, and social distancing. We will be accepting all forms of payment including the addition of paypal for customers who prefer contactless payment. And we will continue to provide “by appointment” pick-up for customers before and after regular business hours.
Please feel free to reach out if you have any questions. We have missed you all and are looking forward to seeing you soon!
Colleen & Don

Hi Friends! In an effort to do our part to “flatten the curve,” we have decided to close the shop for at least two weeks. We will be using this time to set up our garden inventory, bring in new inventory, do some rearranging–all of the things that are hard to do when you’re open 7 days a week!

Please know that if you have something on hold or are hoping to come by for a particular item, just call or stop in and we will be glad to help!

Again, we will be here working–we’re just trying to do our part! Thank you all so much for your support! Stay healthy, wash your hands, and we’ll see you on the other side! Much love. 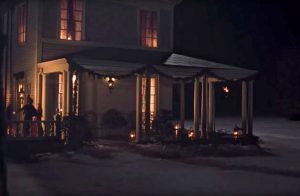 If you follow our Facebook and Instagram pages, you probably already know that we worked with the set designers of the new film “Little Women” as they set up shoots in various locations in Massachusetts. Over the course of many visits (and even more texts), we selected an array of furniture and props to help designers complete the movie’s Victorian aesthetic.  In the world of antiques & design, the Victorian aesthetic has fallen out of trend, but this movie may bring the era back into favor. Little Women designers gave “Formal Victorian” a bohemian twist by layering the sets with textiles, natural elements, and vibrant colors that give the sets a loose, casual, comfortable feeling while staying true to the period.

I saw the film with my daughter who is currently a senior at Barnard College (just 14 years behind Director Greta Gerwig). One of our favorite scenes is the porch dance scene with Jo and Laurie. If you look carefully, you’ll see a set of black Victorian wireware “peacock” furniture that designers rented from us. (The wireware bench is currently in use in the shop as a rack for vintage jeans.) We saw many pieces that came from our shop–quilts, clothing, lighting, furniture, baskets, and unique pieces like an antique book press and a chalkware owl. It was a real privilege to make a small contribution to an enormously important story. But the best part of the film, for those of us who loved the book when we were young, is being reminded of the power of girls. 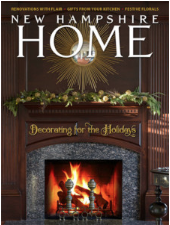 It’s always fun (and surprising) to read about ourselves! The current issue of New Hampshire Home magazine features the recent renovation of an antique Kittery, Maine home and we are happy to be included in the article. The owner, Deb Coffin, and her designer, Annie Ballin, spent many afternoons in the shop picking out accessories for the final touches for this beautiful home. Their taste is always eclectic and open-minded. They gravitate to pieces based on color story & vibe rather than to pieces that would typically be found in a house of this style & age. In addition to an amazing sense of style, these ladies also share an amazing sense of humor!

So thank you to Deb & Annie & NH Home Magazine for including us! Hope to see you soon.