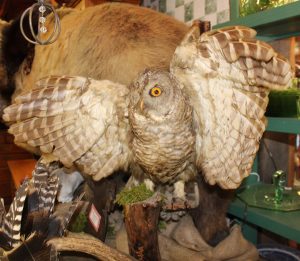 If you’ve been in our shop lately, you know that we buy and sell a lot of antique taxidermy. There are state and federal regulations with regard to buying, selling, and possessing taxidermy so it’s important to understand the laws in your state before buying “stuffed animals.” In the state of New Hampshire, the general rule is that taxidermy is allowed as long as the animals were not obtained illegally and are not protected. This is a current list of  New Hampshire’s Endangered Species. Creatures protect by federal laws include birds that are part of  The Migratory Bird Treaty Act. Other protected birds include birds of prey, like eagles and owls. In fact, possession of taxidermy eagles and owls is illegal in many states even if the piece was created before the laws were enacted. In the case of our owl, we contacted the New Hampshire Department of Fish & Game for permission to display her in the shop.