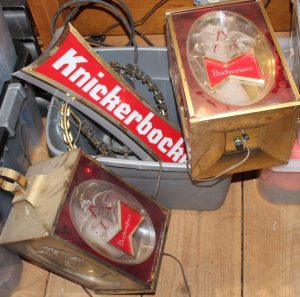 Our days rarely unfold as expected and this week’s “on the road Tuesday” was no exception. We started out with plans to hit two of our regular haunts, a favorite antiques shop and a consignment shop that was holding four 1970s Steel Case chairs for us. As we headed out, we called two of our favorite pickers to see if we could come by to look at their recent acquisitions…so our 2-stop day was now a 3-stop day.  After an hour and a half in the antiques shop, we left with a 1960s crystal rock lamp, a few pieces of vintage clothing, records (of course), a 1950s cat statue, some jewelry, and other assorted smalls. At our second stop, we loaded the Steel Case chairs and then spent an hour picking everything from vintage Dickies coveralls & a 1960s faux leopard coat to industrial gauges & a 1950s siamese cat lamp. As we were loading our purchases, our friend/shop owner said “Hey, do you have time to make another stop? There’s a man in town who has some great beer lights and bar stools in his basement. I haven’t been able to get there and I’d love to give you the call.” So we called our picker friends to delay our arrival time and we set out to meet Rocco (and visit his basement).

Rocco was a charming, wheelchair bound gentleman who was waiting for us when we arrived. He told us that he had lost his wife two years earlier but he was making the best of it. After telling us about the parties they used to have in his 1960s man-cave, he sent us down to the basement to see it in person. With Rocco’s approval, we found a screw driver and removed two 1960s Budweiser lanterns and a Knickerbocker light from the cement wall behind the bar. We also bought 4 vintage wooden slat bar stools and a pair of kitschy plaster statues (a pirate and his busty sidekick). Rocco showed Don his LP collection (opera, classical, and jazz vocal) and told us about his favorite operas. He tried to persuade us to stay for cocktails but we still had another stop to make and we try not to BWI (buy while intoxicated).

So off we went to our fourth stop of the day! We hadn’t seen these folks since last spring and discovered that a prostate cancer battle had sidelined their picking. But they had just received a cancer-free report and were ready to get back on the hunt. Despite being sidelined for 4 months, they still had some great things for us including an industrial mannequin, a pair of 19th century iron handcuffs, a cement greenman plaque, some Roseville pottery, and a 1980s jewelry mannequin head. After we paid them, we left them with a wish list and headed for home.

So our 2-stop day turned into a 4-stop day. Fortunately, my picker instincts told me that we should take the truck and the van…and we filled both! But more than the hunt, the best thing about our road trips is seeing old friends and making new friends. Because in this business, it’s all about the story.